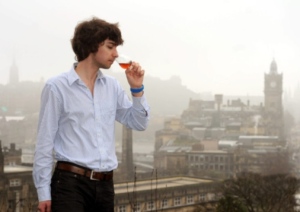 The first review of 2012 should be a good one to kick us off, and being the bourbon-head that I am I decided to go with a whiskey, recently purchased, and thoroughly loved.  Blanton’s Single Barrel Bourbon is touted to be the first single barrel whiskey to be sold on the open market, and its refinement definitely shows.  The bottle is unique, if a little odd, and reminds me of the Holy Hand Grenade of Antioch from Monty Python and the Quest for the Holy Grail.  The bronze horse on the top of the cork is actually pretty cool looking up close and it comes in a nice bag that I’ll probably use for a while in any case.  I know of a few different levels of Blanton’s, Silver Gold and Green labels, (rather like JW does) but its really hard to find anything other than the standard brown label bottles (in my experience). END_OF_DOCUMENT_TOKEN_TO_BE_REPLACED

The format of this review may be a bit different since I’m doing a side by side comparison, but I figured I would at least give the regular information for the new and unreviewed whiskey, being the single barrel Buffalo Trace.  As far as I can tell this is a special selection for the liquor store I frequent in New Jersey.  ( www.shoppersvineyard.com )

So this would be my first side by side comparison of what promises to be two very similar whiskeys.  The first, Buffalo Trace, I have already reviewed and you can click to read that review which was a favorable one.  The new one is a Single Barrel version of the same whiskey, aptly names Buffalo Trace Single Barrel.  Like I said above as far as I can tell this is a very limited occasion and was hand selected by the purchasing team at Shoppers Vineyard.  This is their explanation:

“I made my first trip down to Kentucky about 8 years ago. Back then, bourbon wasn’t as big as it is now, but I had a feeling it was ready to explode… and I was right. Items that were readily available back then are impossible to get now. The prices have also SKYROCKTED, which is not a good thing but that’s what happens when demand FAR exceeds supply.  END_OF_DOCUMENT_TOKEN_TO_BE_REPLACED

Buffalo Trace Distillery is both the oldest existing distillery in the U.S. and the home to several small batch bourbons which I will no doubt be reviewing in the future (Most notably Blanton’s Small Batch).  The easiest part of this whiskey is buying it.  At 23.99 for a 750ml bottle, it’s probably on the lower end of cost in my collection but not at the bottom as far as taste goes.

My first glass of BT was surprising.  I was expecting more burn and less flavor for the price they put on this bottle but instead got a nice broad flavor profile to go along with the burn.  Let me say that the first drink was a kick in the mouth, a little reminiscent of Knob Creek with the punch, but mellowed out pretty soon after it and gave a nice and sweet (if very short finish).  I would say the strength of this whiskey would be its bold wood and rye flavors.  I tend to like very wood heavy whiskeys and this definitely didn’t disappointing in that regard.  The invariable weakness of the whiskey is the finish.  The oak finishes strong, but it doesn’t last very long and the burn that comes along with it doesn’t diminish, even after letting my ice open flavors fully.

I will likely buy BT again, if for no reason that its a very well priced bourbon with a good punch for those rough days.  I would recommend it, to someone who likes bourbon, but not to someone who is on the fence.  Definitely an acquired dram.

For a side by side comparison of this and Buffalo Trace Single Barrel Click Here.

Official Description:   (their official description is about 3 pages long.  if youre interested go read it.  a lot of good info there 🙂 )

Light bronze in color with streaks of gold, Buffalo Trace Kentucky Straight Bourbon Whiskey bears a complex aroma of vanilla, mint, and molasses. Its taste is pleasantly sweet and contains notes of brown sugar and spice that give way to oak and leather. The long and dry finish has significant depth. When enjoyed with water, flavors of toffee, dark fruit and anise are revealed