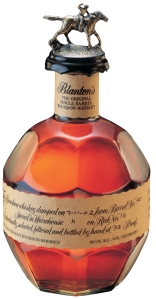 The first review of 2012 should be a good one to kick us off, and being the bourbon-head that I am I decided to go with a whiskey, recently purchased, and thoroughly loved.  Blanton’s Single Barrel Bourbon is touted to be the first single barrel whiskey to be sold on the open market, and its refinement definitely shows.  The bottle is unique, if a little odd, and reminds me of the Holy Hand Grenade of Antioch from Monty Python and the Quest for the Holy Grail.  The bronze horse on the top of the cork is actually pretty cool looking up close and it comes in a nice bag that I’ll probably use for a while in any case.  I know of a few different levels of Blanton’s, Silver Gold and Green labels, (rather like JW does) but its really hard to find anything other than the standard brown label bottles (in my experience). END_OF_DOCUMENT_TOKEN_TO_BE_REPLACED